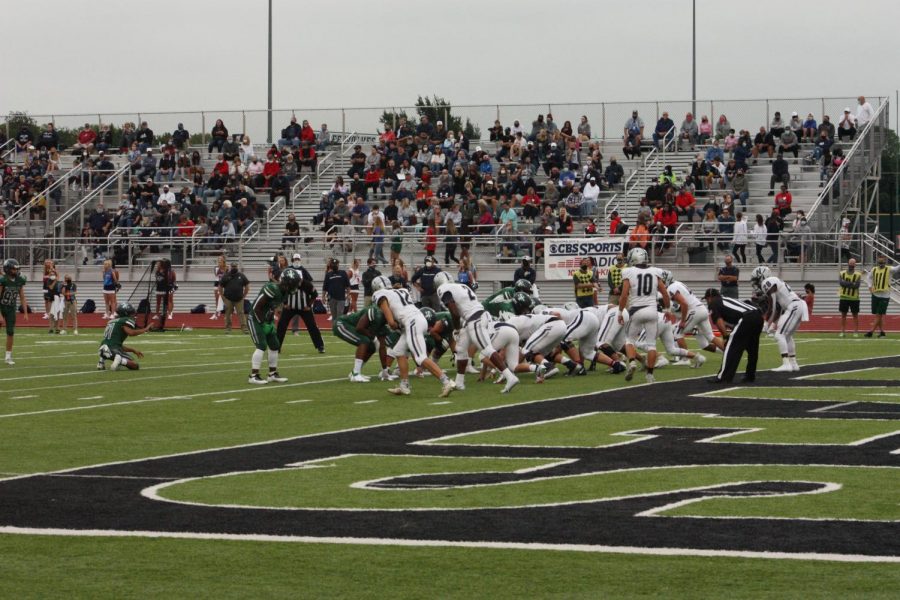 Edmond North VS Edmond Santa Fe, Santa Fe lines up to make an extra point after a touchdown.

Hosting two of our biggest rivals early in the year, Edmond North and Edmond Memorial, makes every student and player bubble with excitement. As the 2020-2021 football season kicks into gear, the always challenging Edlam battle finally arrived to kick off the new year. Along with Edlam, every team and player had an extra challenge of approaching this season safely by following the OSSAA guidelines, but overall, winning was still the priority.

On September 11, Santa Fe hosted the first Edlam game of the year against North.  Preparation for the game started before the teams even hit the field. The Santa Fe varsity football team had their temperatures taken and their hands, even sometimes their feet, sanitized. They are reminded often to have their masks on, either a facemask or a cloth shield that is attached to their helmet.

“Us coaches have started coaching to stay healthy more and more not only because of injuries but also so they [the team] remember that at this time they have more than themselves to help protect,” assistant coach Roger Pfieffer said.

Once the teams hit the field and the whistle blew to officially start the Edlam battle, running back Ethan Hyche scored a touchdown which set the tone for the remainder of the game. As the game against North progressed, Santa Fe continued to score posting a 21-7 lead by halftime. The momentum was strong on Santa Fe’s sideline. However, North started to crawl back in the second half, outscoring Santa Fe by putting up two touchdowns in the third quarter to Santa Fe’s one. This made the current score at the end of three, 28-21 in Santa Fe’s favor. The Huskies did not go down without a fight, scoring two more touchdowns, including one kick return touchdown in the fourth quarter. But thanks to Senior Micah Snoddy’s run game and two more touchdowns for the Wolves, and Scott Pfieffer with a great passing day with four touchdowns and Talyn Shettron’s 3 touchdowns garnered Santa Fe’s first win of the season at a score of 42-35.

The only rival remaining in Edlam was Memorial on Wolves turf. Originally planned to be on Friday the 25th, the game was suddenly rescheduled for the next Monday, the 28th. With Santa Fe having beat Memorial five times before, the rescheduling of the game had not dampened the spirit of the football boys.

“It gives us more time to prepare and just get pumped up for the game” Senior Matthew said prior to the game.

The Memorial game posted a final score of 46-20 in Santa Fe’s favor. The Wolves showed strength and perseverance as they worked hard for the win after a three-day delay on the game. The game was cautiously played, featuring no passing touchdowns, but instead giving Hyche the ball as he racked up three touchdowns in the win. Bulldogs showed a lack of discipline resulting in many penalties costing them yardage and allowing touchdowns giving Santa Fe a 20-13 lead going into the half. After halftime, The Bulldogs started strong, getting yet another touchdown right out of the gate with a quarterback run. Luckily the Wolves held on by continuing to run the ball and the clock down with running backs Micah Snoddy and Ethan Hyche leading the way. Thanks to a strong performance by the Wolves defense and excellent run game, they sealed the deal and earned Santa Fe their sixth straight Edlam City champ win! The setting of the game improved from the first game, as the student section was reminded to space out and fans reminded to keep their masks on. Winning Edlam was a great way for the Wolves to start the season, as they head into district play, sitting on a 2-2 record.

After a rocky start to their season, losing at Stillwater and Owasso, the Wolves football team stuck it out. They had some new challenges and new situations, but overcame setbacks and were victorious in the fight for city champs. They will continue to work hard to keep improving as their season progresses. The season is wide open, sitting atop an even record right now. All they can hope for is that these two wins bring the momentum and confidence our team needs in order to achieve another playoff run come November.